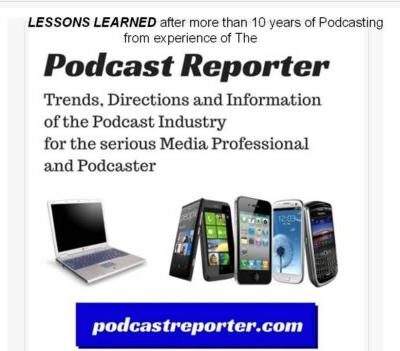 In this repurposed episode, we deliver to you an interview with Chris Brogan at a Podcast Movement conference, in which we learn the beginnings of one of the earliest podcasters and sponsors of the podcasting conferences (namely podcamps), as well as other topics in the early stages of the podosphere which made Chris Brogan a top celebrity in New Media, podcasting and authorship. 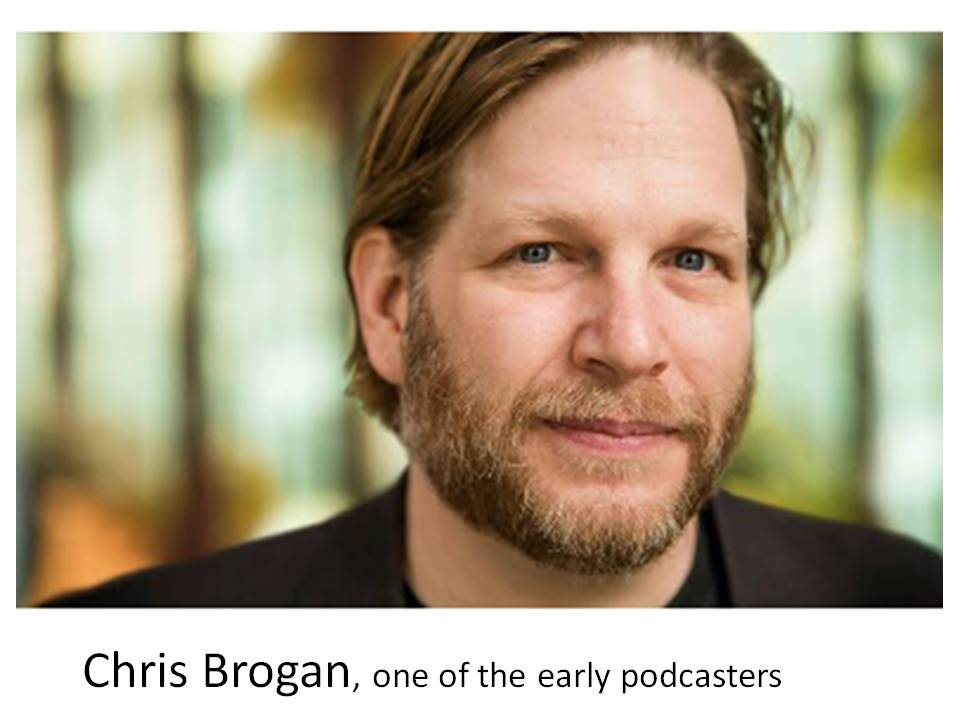 This interview had a bit of ambient noise, as it was right off the expo center floor of the conference — but the topics and interest of Chris Brogan to podcasting are still alive today as he continues his career in New Media:

Now, I have followed Chris Brogan from interviews which I have done with him over the years, as well as memories of the Podcamp conferences of which he was a co-founding member in 2005.

He and I do share a common ground in podcasting, and I have also purchased some of his intellectual property products and offerings in the past. His books, on the other hand, have turned into best sellers — some he has authored alone, and others he has co-authored with authorities in the field (e.g., Julien Smith in Trust Agents).

Now, as you will hear in this REPURPOSED EPISODE, the podosphere has some themes that are evergreen, and there are a few good “gems” of suggestions that are viable in today’s environment of the podosphere for those who are new or aspiring or upcoming podcasters.

I would highly recommend that you consume this brief interview to select some ideas that can help your show with content, as well as to grow and increase your audience. This could be a key case in point when you feel that maybe growing “dark” to pursue other New Media ventures would be a good direction for you and your business. And Chris has pivoted from his early podcasting days to the environment where interviews and business ownership were key focus points.

Thus, we hope that you can benefit from this evergreen content from Chris Brogan to help you and your business and your podcasts become successful.

In this episode of the Podcast Reporter, we deliver some tips from a couple of great podcasters on the topic of being a great guest and being interviewed.

First, we point you to a recent email from Chris Brogan about how you can be the best guest possible within your podcast experience. In this email distributed to his list of fellow-thinkers, he mentions these key action items:

“How to Be the Best Guest

I have always been an advocate for good interviews. I myself had a podcast show (one of the first since 2006) that dealt with interviews of entrepreneurs, which was called The Struggling Entrepreneur. This show was well before others who copied this format came into the podosphere, and six years before any other podcaster was “on fire.”

From this interview-based show, I received some good information that is evergreen from Max Flight, after I interviewed him for my show, The Struggling Entrepreneur.

Thus, for a good 30-minute conversation with Max Flight about being interviewed, here is an audio episode in which Max discusses the topic of “being interviewed” in a great manner. This is evergreen content, and it is still very relevant today.

For this podcaster, the art of interviewing is a topic that has been tossed around the podosphere since 2006 in various ways. For those of you who have had jobs before where you were involved in events marketing or some kind of journalism, then your experience will help greatly in adding the professional touch of interviewing, as well as being a guest for someone else’s interview on another podcast.

Although it seem as if today’s environment has every neophyte podcaster giving advice on being an interviewer, but few have actually captured the formulas for being a great guest. Both Chris Brogan and Max Flight have delivered to you the best suggestions from their experience.

We hope that you, yourself, can learn some gems from these two podcasters to improve your skills as a guest when you are being interviewed. Why? Because your audience will be able to see great VALUE in your content when they listen to you as the guest.

In this episode of The Podcast Reporter, we discuss a recent post by author, content creator and thought leader, Chris Brogan titled “Thoughts on refreshing a brand.” This post was sent to the distribution list for Chris Brogan’s followers, and it takes into account the nearly 20 years of experience that Chris has had in the space for content creators and authors — and for 15 years in the podosphere.

Thoughts on Refreshing a Brand

Over time, we’ve narrowed the concept down to 3-4 products total, and 3 total ways to buy.

The way to buy:

And the pricing is “insanely affordable” (and he gives some examples of each).

But Chris felt the need to refresh the brand. In looking at his firm, Owner Media Group and its offerings, he realized that he had to polish up the offerings and look better for 2020 and beyond.

Thoughts on Refreshing a Brand

Chris then elaborates on the elements required to refresh a BRAND. They include:

What is required for Chris is something “so that the brand feels new again, useful, pertinent, and valuable to you.” In this way, he feels that a business — or a podcast — can be REFRESHED.

In this episode, we focus on some thoughts that were delivered to us by a thought leader, Chris Brogan, in an email from his subscription list. The mail was dated 9 August 2020, and the subject was: “What we’ve learned so far.”

In addition, as one of the earliest podcasters in 2004 and 2005, he was one of the four founders of the podcamp events, which are barcamp-style inbound conferences that had several good ideas — among them, no fees for everyone, and all people were participants and not attendees, and that anyone could present and share without having to be in a psuedo-elite class. 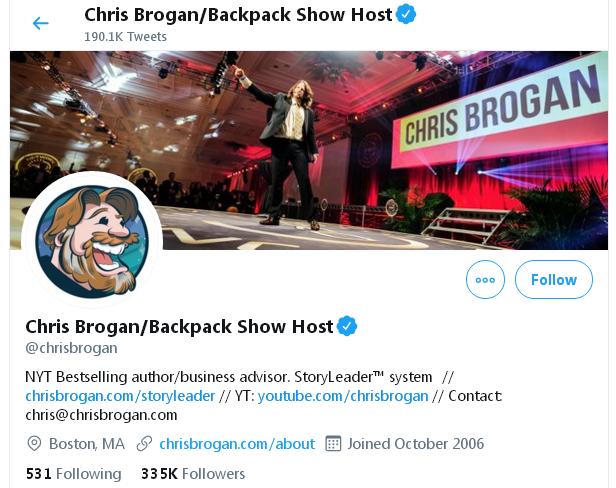 Because I have known Chris since 2010 in our in-person meeting (and since 2007 in various podcamps and other podcast meetings and entrepreneur venues), I thought that his words-of-wisdom may be beneficial for both podcasters and entrepreneurs.

My dealings with Chris Brogan

The last time I met in person with Chris was in 2014 at the initial Podcast Movement conference in Dallas, in which he was the keynote speaker to kick off the first ever conference of this type (which is still going strong, with a virtual conference scheduled for October). Before then, I had actually had an interview with him and Julien Smith, as co-authors of the book, Trust Agents. And we discussed the plights and tribulations and benefits that faced the entrepreneur at the time. In fact, I did record the interview, and it was published in PodcastReporter.com as a bonus episode on 28September2009.

And when it came time for him to be the keynote speaker of the very first Podcast Movement conference event in 2014, I was there with him to get his ideas for entrepreneur and podcaster success factors. So I did manage to corral him in a corner of the conference during a few moments which he did not have scheduled in a break-out or session, and I managed to get an interview at the Podcast Movement Conference in 2014:

The latter was known as episode # 12 of this show.

Now, sometimes the original text of a short email and what is said is much more important than a summary or an abridged edition. In this case, I felt that for the entrepreneur and podcaster to get the maximum benefit of this conversation, it would be best to deliver the entire message from Chris. And knowing him personally as I do (and, yes, I have purchased some of his webinars and offers from him before), I know that the would not mind for me to share these words with you. And if you find this of value, you may want to go to his web site and subscribe, or go to his YouTube channel of The BackPack

And there, you can also subscribe to his video channel and latest delivery of information.

“What we’ve learned so far…”

And here is the email letter that was sent out by Chris Brogan to his network of subscribers on 9 August 2020:

We hope that these words from Chris Brogan may help to strengthen your resolve to succeed, in spite of the “Plandemic” and fearmongering and mask-debates going on during the virus crisis.

We hope that you can reflect on what you have learned so far, and that this will help to get you aimed at the targets of not only where you will want to go in the near future, but the success targets that you will have to learn in the coming months and years.

As you will hear in this audio episode, we describe each of four steps of the podcaster or new media content creator in becoming a recognized THOUGHT LEADER. 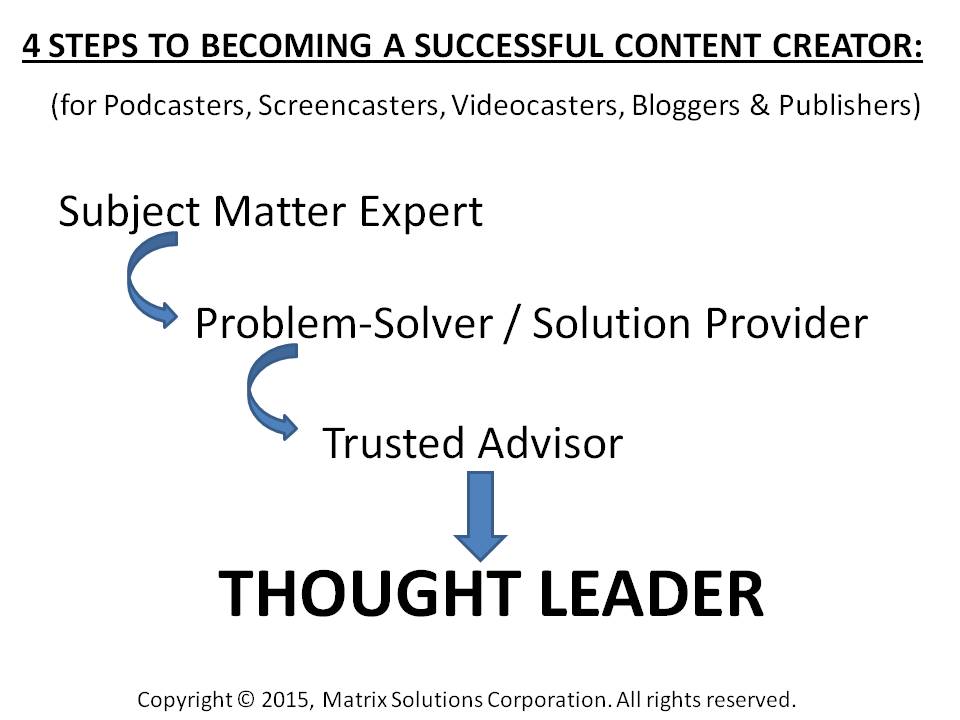 We also refer to a book by John Jantsch called “The Referral Engine” to become a solution provider and trusted advisor.

In addition an example of a trusted advisor is Lon Naylor of ScreenCaptureVideo.com in the area of screencasts and video training with both Camtasia Studio and PowerPoint by Microsoft.

And finally, an example of successful thought leadership is that of Chris Brogan, who is a podcaster, course designer and author of various books (such as Trust Agents, with co-author Julien Smith) on business relationships and success. Becoming recognized as a thought leader will result in receiving invitations to be a keynote speaker in certain inbound and virtual conferences for podcasting.

In addition, Paul Colligan is another example of a podcasting thought leader.

So we hope that this content can help you set your objective to become a podcasting thought leader and make your business a success.